The Institutionalisation of Human Trafficking by Networks of Terrorist Organisations

Is there a link between terrorist organisations and human trafficking?

The interconnection of terrorism with human trafficking became widely noticed around 2014, when two incidents came to light. On the one hand, the actions of ISIS against the Yazidi minority in Iraq and on the other, the kidnapping of girls from a school in Nigeria by Boko Haram. Both events highlight a change in the way terrorist networks operate. The ever-increasing human trafficking incidents by terrorist organisations eventually led to the recognition of the phenomenon also by the United Nations. The Security Council, in its Resolution 2331 in 2016, condemned the sale and trafficking of human beings by ISIS in Iraq and Lebanon, making a special reference to the Yazidi religious minority and to the trafficking of human beings for the purpose of sexual slavery and exploitation by Boko Haram and Al-Shabaab. It also pointed out, that trafficking in human beings could contribute to the spread of other forms of transnational organised crime, leading to the aggravation of conflicts and to increased insecurity and instability.

Why do terrorist networks engage in human trafficking?

The integration of human trafficking into the functions of terrorist networks is considered to serve three distinct purposes, as

Initially, it is obvious that human trafficking is particularly lucrative, as profits are high and those responsible rarely end up in jail. Particularly it is estimated that only in Europe €2.5 billion yearly are being traded through human trafficking. Therefore, trafficking in human beings is expected to increase, considering that ISIS has benefited in 2016 only from kidnappings with revenues of $ 10-30 million, while profits from oil sales and antiquities sales are shrinking.

The second reason why terrorist organisations resort to human trafficking is that, just like any other form of sexual violence, it has the power to destroy a society as a whole. The situation today in Nigeria or Iraq makes evident that trafficking intimidates populations and, at the same time, reduces resistance. After all, the enslavement and rape of women has been used also in the past as a method of war – for example in the case of Yugoslavia. When trafficking in human beings systematically targets specific ethnic and religious groups, it aims at their repression and at the permanent expulsion of specific communities from specific territories.

The practices described above have become an well-established tool for recruiting radicalised men from deeply conservative Muslim societies, where sex is considered a taboo, and the association of men and women outside marriage is forbidden.

The promise of spouses and sex slaves serves as a pole of attraction for recruiting new fighters and rewarding existing ones. Beyond that, attempting to justify sexual violence also aims at creating a future generation of fighters. Both ISIS and Boko Haram use forced pregnancies and forced marriages to increase the population of children in their territory. 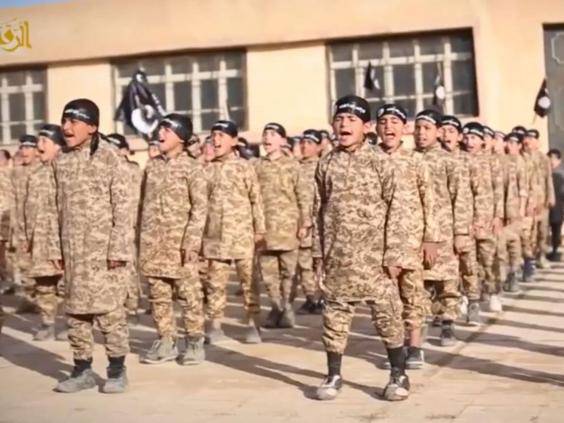 The example of the Yazihi minority

The case of the Yazidi minority, from Sinjar in north-western Iraq, stands out. The Yazidi minority was systematically targeted by ISIS as renegades and “devil’s followers”, because they historically believed in Zoroastrianism, as well as in other ancient Mesopotamian religions. The expulsion and atrocities experienced by this particular minority have led many humanitarian organizations and transnational organizations to refer to ethnic cleansing, war crimes and crimes against humanity.

ISIS invaded the Yazidi’s land in 2014, killing all the male population and enslaving women. Thousands of Yazidi women and girls – from the tender age of 9 – were sold as commodities or given away as gifts to ISIS supporters. Moreover, ISIS made it clear that not only the Yazidi enslavement campaign had been organised in advance, but also that Yazidi -in comparison to cases of Christians and Jews- had no chance of lenient treatment or release by paying a tax known as jizya.

The atrocities in captivity leave women seriously traumatised, up to the point that some of them seriously consider ending their lives. Suicide seems to be the only way to avoid constant rape, physical and psychological violence, forced marriages and forced religious conversion. Those who survive and escape have to face the pain of losing most of their relatives and the social stigma that is connected to rape. Women who manage to escape, frequently make public appeals for further assistance for survivors, as they do not have access to the necessary psychological and pharmaceutical support that they desperately need.

Unfortunately, neither the various UN bodies nor regional organisations are able to provide the extensive care that survivors need. 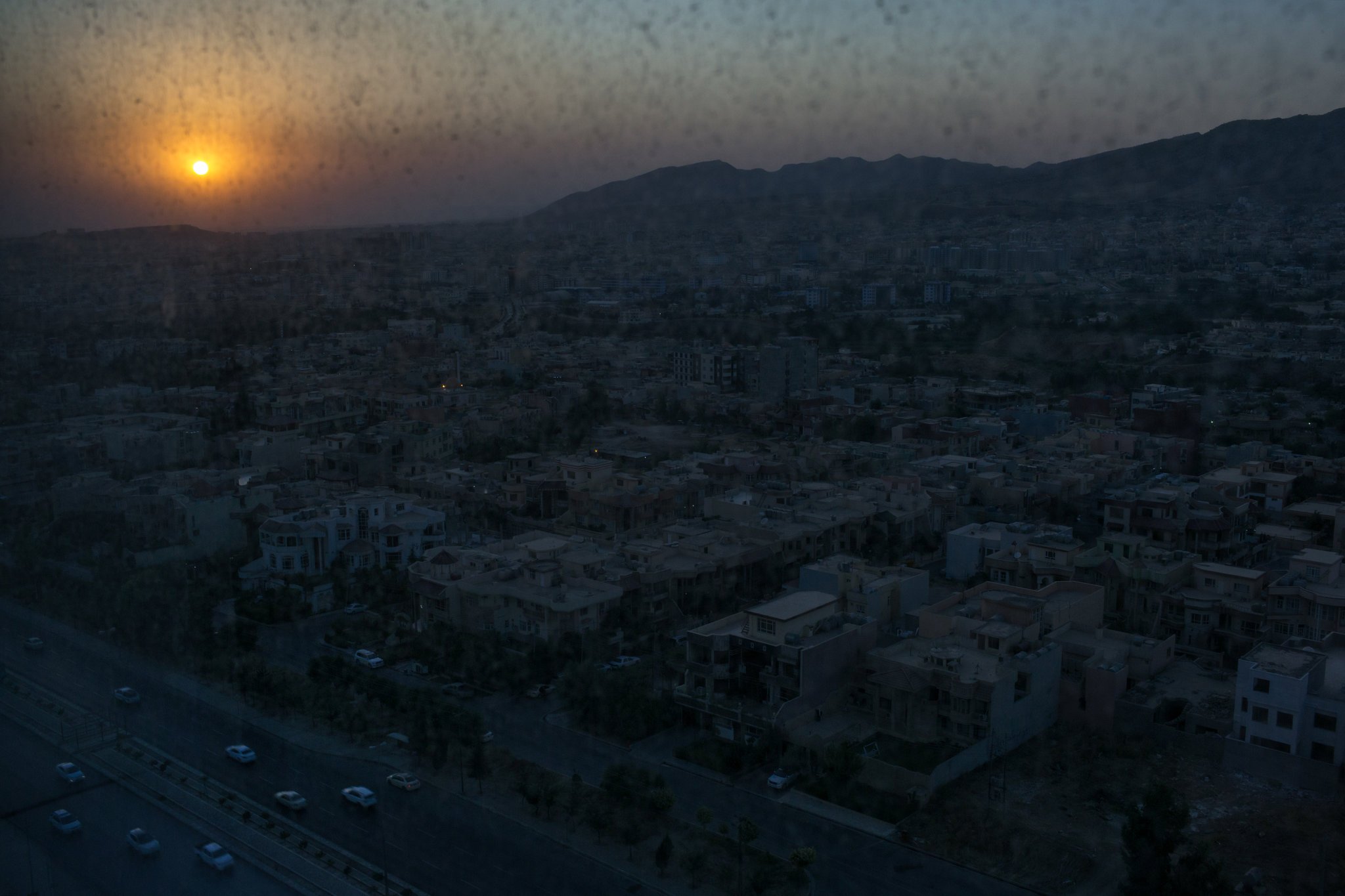 Sunset over Dohuk, a region in northern Iraq. Credit Mauricio Lima for the New York Times

The institutionalisation of sexual violence and trafficking in women

The most frightening effect of this attempt to integrate human trafficking into the systematic operations of terrorist organisations is that human trafficking is now becoming a crucial part of their ideology and modus operandi. Repeatedly, ISIS leadership has chosen a distorted and selective reading of the Quran and other religious texts to justify their actions, reaching even the point of publishing a manual containing guidelines for slavery.

The manual explains that slaves are the property of their owner and can therefore be disposed of or sold as any other property. In addition, rape and trafficking of women and children are being justified, through selective reading of sources, as spiritually beneficial and righteous practices, but also as a punishment against non-believers.

ISIS’s actions are “innovative” in this abominable sector, by creating a sophisticated, institutionalised public market for trafficking in human beings, the so-called “Sabaya Market”. There is a new form of human trafficking now taking place, which happens collectively and on a large scale, as terrorist groups are able to invade regions and enslave entire populations. Among the prisoners, young women and girls are separated and are transported in an organised and methodical manner to different locations.

There is an entire network of facilities where victims are detained, which includes dedicated showrooms where women are registered and inspected by potential buyers. For the management of these sexual trafficking networks a detailed bureaucratic system has been developed, which includes not only official contracts but also a competent Islamic court for resolving disputes. There is even a specific inventory system, as well as related terminology. Women are called “Sabaya” and then their name, hence the name of the market as “Sabaya Market”. 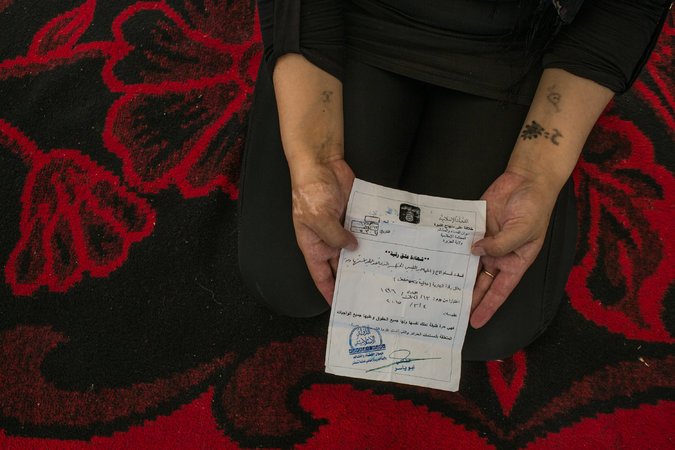 A 25-year-old Yazidi woman showed a “Certificate of Emancipation” given to her by a Libyan who had enslaved her. He explained that he had finished his training as a suicide bomber and was planning to blow himself up, and was therefore setting her free. Credit Mauricio Lima for the New York Times

It is estimated that about 3.000-5.000 women are under the control of ISIS and are being trafficked in the region at an alarming rate. Their exact number remains unknown due to the ongoing battles and upheavals. In 2015, a UN report estimated that the figure was around 3.000, but humanitarian organisations and local activists estimate it to be much higher.

Addressing the phenomenon of trafficking in human beings by terrorist networks is a topic that has not been examined enough. There is not only limited research on it, but also limited response by international and humanitarian organisations. It is well known that rape and other forms of sexual violence, enslavement and abuse committed during armed conflicts violate the international rules of war. International criminal courts have also ruled in the past that rape and sexual violence can amount to torture and inhuman treatment. As mentioned above, and according to the UN Office of the High Commissioner for Human Rights, the mass rape and exploitation experienced by Yazidi can be considered crimes against humanity, genocide and war crimes.

European Commission (2013). Trafficking in human beings the slavery of our times. Factsheet. https://ec.europa.eu/home-affairs/sites/homeaffairs/files/e-library/docs/thb-fact-sheets/factsheet_thb_en.pdf.