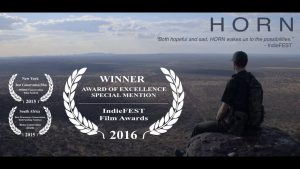 On April 10th, 2019, the Bridge hosted a film screening and discussion of the independent film ‘Horn’,  which reflects on rhino protection initiatives in South Africa. In attendance was Reina-Marie Loader, the film’s director and a former Vienna Master in Human Rights student, who uses an uncommon angle to explore Rhino protection. As Loader pointed out, discourse on rhino protections often focuses only on the end of the global trade chain, namely buyers of rhino horns in Eastern and South Eastern Asia. The film ‘Horn’, however, reflects on how the legacy of colonialism and the lack of jobs and economic opportunities in the local area contributes to illegal rhino hunting. By recording the life and work of rangers in the field, the film sheds light on a creative way of combating rhino poaching, namely, to protect rhinos by creating jobs and opportunities for improved standards of living in the local communities. From such new perspectives, rhino protection is not only an animal welfare problem, but also a human rights issue in the South African context. 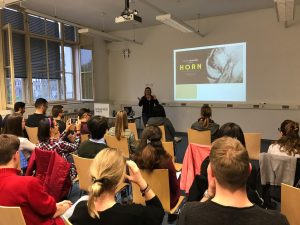 In addition to holding a nuanced discussion of this complicated social issue, the film is also cinematically impressive, showing shots of the vast and beautiful landscape of South Africa and contrasting those with ugly, raw, and shocking scenes of dead rhinos, which leaves  viewers a complexity of sensations. After the screening, the activity continued with an in-depth and vivid Q&A on the film in which Ms. Loader also shared her personal experience during the shooting of the film in South Africa.