the critical and challenging policy of the French President Macron

President Macron is facing an immigration challenge. The French government is about to unveil a new immigration law with some tough provisions that have caused anger among human rights organisations.

The French President Emmanuel Macron travelled to Calais on Tuesday 16 January to outline his government’s new policy towards immigration and asylum. The head of state firmly defended his migration policy, arguing that he will combine republican order, administrative efficiency and duty of humanity. The new French laws will be discussed at the country’s council of ministers in February and will centre on five aims: controlling the flow of migrants and refugees, enhancing the system dealing with asylum seekers, speeding up the asylum-seeking process, tightening measures to help the integration of refugees and laws to remove those who are in the country illegally. Macron’s speech left nothing to chance. An agreement in 2003, known as the Touquet Accords, moved the British border to Calais and left France dealing with the refused access of migrants into Britain. Last year, Calais welcomed up to 8,000 refugees and migrants eager to reach Great Britain. The northern city became the French symbol of the European migrant crisis, but the French police dismantled the so-called “Jungle camp” a year ago. According to the association « l’Auberge », a leading migrant aid group, 600 migrants still live in and around Calais in January 2018, and are facing desperate living conditions. The president said on Tuesday: “In no case will we allow another Jungle here”, adding that the illegal occupation of public spaces would not be tolerated. 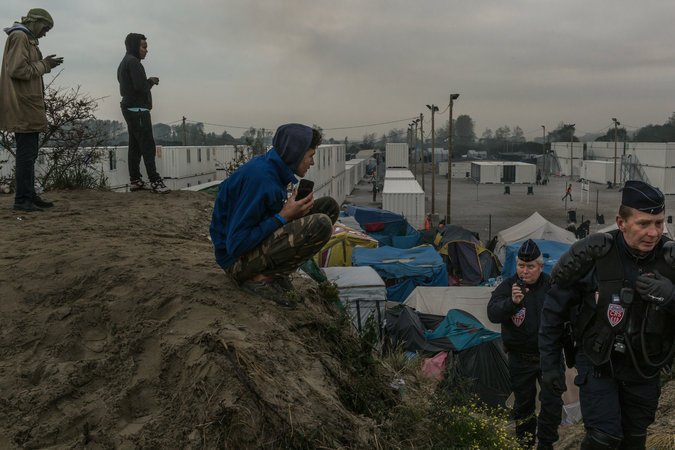 The Jungle, a squalid encampment that once housed over 8,000 migrants, was torn down by Mr. Macron’s predecessor in the fall of 2016. Credit: Mauricio Lima for The New York Times

Looking across the channel for a solution

The French president is pushing Britain to provide financial aid to tackle the migrant flow. On 18 January 2018 he also demanded the UK do more to help ease the migrant burden when he met British PM Theresa May. A spokesman for Mrs May said: “We’ve taken a significant number of unaccompanied asylum seeking children from the area around and in Calais already.” Given that most of the migrants going to Calais are desperate to reach England, a lot of French see the situation in the city as one of Britain’s making. The issue is sensitive in France since Calais and the region around have benefited from close ties with Britain since the Channel Tunnel was built. With unemployment in Calais well above France’s average, the concern is that Brexit and tighter borders could have a further negative impact on jobs and growth in the region. But the problem runs deeper than that, migrants’ rights are being infringed with exceptional and unprecedented seriousness, and the French government is neglecting this major issue. Natacha Bouchart, the right-wing mayor of Calais, told BFM television on Monday 15 January that the local population was “tired” of the situation and expected a lot from the president’s visit. Macron acknowledged those concerns, saying he was aware of local fears over Britain’s exit from the EU in March 2019 and barely mentioned the rights of the migrants.

The living conditions of Migrants in Calais

Under the government’s new immigration law, anyone not classified as a refugee in the strictest sense, namely economic migrants, will be forced out. While promising to stem the flow of migrants through the port of Calais, the president had to face the growing scepticism of local humanitarian and charity organizations with regards to the protection of human rights. They have criticised his government for taking a hard line and planning “mass deportations”. Last October, human rights campaigners said police violence against migrants and refugees in Calais had reached “excessive and life-threatening” levels and expressed particular concern for unaccompanied children. Macron justified that he would get tough on police if they use excessive force against migrants, but defended the security forces against allegations of brutality levelled by certain charities, dismissing some as lies. “The situation for the migrants here is really disgusting,” says Sylvain Marty, who has been doing volunteer work in Calais for over two years now. “Everyone sleeps outdoors. Tents are gone within two days. The police confiscate them, along with the sleeping bags.” The situation is in many ways worse, added Francois Guennoc of Auberge des Migrants, “It’s catastrophic, both materially and mentally because migrants have no right to pitch tents, to ensure no new camps spring up. ” In October, the French administration and security forces’ internal investigations departments found convincing evidence that police used excessive force and committed other abuses, and made a series of recommendations for this to change. Despite those recommendations, abuses continue and authorities have turned a blind eye to widespread reports of police abuse against asylum seekers and other migrants.

The president is not used to being accused of inhumanity and criticised on his policy, but that has been the tenor of a weeklong barrage in French media. Shortly after he became president of France last year, Macron had a hopeful vision for humanely addressing the country’s asylum crisis, “By the end of the year, I do not want to have men and women on the streets, in the woods. I want emergency accommodation everywhere,” he said, but none of this has happened. In Calais, migrants face police harassment and violence, and are at risk from the cold. This reality sits starkly at odds with Macron’s commitments to a humane approach. His face appeared on the cover of several magazines accusing him that “ his policy contradicts the humanism he advocated”. The French magazine Le Monde also wrote “his presidency was going to be held under the auspices of a responsible humanism, but we woke up in a country where Calais migrants are being stripped of their blankets”. The President who won against Marine Le Pen, the leader of the Front National party and France’s anti-immigrationist, should not forget that he was elected for his humanism. He should ensure that authorities end abuse and that emergency accommodation are always open throughout the day as well as at night for those who are homeless this winter. The authorities must ensure migrants have full access to information and asylum procedures without undue delays. Macron’s rhetoric should become reality, and it should start now in Calais. France can do better.